Start typing and press
Enter to search
Skip to content

I’ll be honest, when my parents first told me my dad’s job was relocating him to Singapore, I was less than thrilled. Asia did nothing for me. I was a little bit bummed that the relocation wasn’t somewhere more exotic or sophisticated. Australia? Paris? I can think of 20 places I’d rather visit than Asia. But hey, I am a woman who can admit when she is wrong. And let me tell you, I couldn’t have been more wrong. 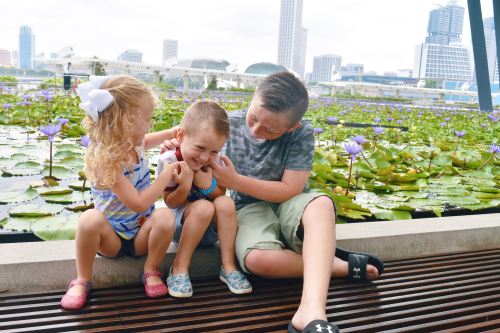 Sure you’ve got the obvious places – the Great Wall of China, the Taj Mahal – but if you think of Asia only in terms of these places it’s like thinking of a vegetarian as someone who only eats salad. We’ve just hit the top of the iceberg with our first trip to the east. Our adventures in Singapore and Indonesia exceeded all of our expectations and left us hungry for more. We know there is so much left to discover.

Here are just a few of the ways Singapore exceeded my expectations.

What was my first clue that Singapore was going to hold more than I expected? The airport. Yep, you heard that right, it was the airport. The airport starts like any other: duty-free shops and restaurants galore but it isn’t long before you’ll start to notice this isn’t your average airport. Between the butterfly garden, the sunflower garden, the movie theater, the four-story air-conditioned rain forest, the rain vortex waterfall, and the ropes course you could easily spend the afternoon wandering around. Word has it, there is even a swimming pool but we didn’t make it there to deduce fact or fiction during this visit.

Singapore is a major urban city. Think skyscrapers and buildings galore. At first glance, it looks the same as every other major world city. But it won’t take long to see it’s a step above the rest. First of all, it’s incredibly green. A lot of cities are intentional about adding green spaces to their landscape. But in Singapore, it felt effortless. There were cafes built around trees, fountains around every turn, and lily pad gardens in the middle of sidewalks. It was by far, the most beautiful city I’ve seen to date. 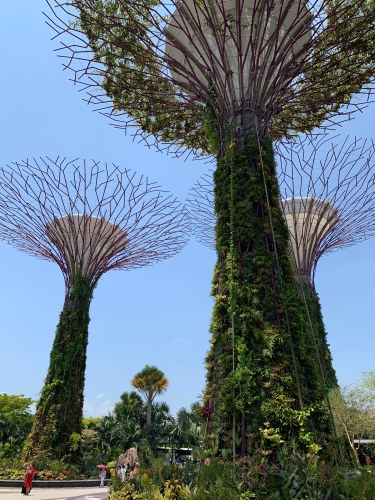 It’s by far the cleanest city I’ve ever been too. I’d even bet it is the cleanest city in the world. 30-second rule, heck you could make it a 5-minute rule in Singapore. You’d be hard-pressed to find a piece of trash or crumbs of food anywhere on the sidewalk. Littering is illegal and in fact, first-time offenders who throw something small like candy wrappers on the ground will be fined at least $300 and may even require a court appearance. Believe it or not, even with my wild bunch, we managed to avoid having our day in court. The odd thing was that there weren’t a lot of public trash cans available. We’d have to hold onto our trash and throw it away when we returned home. It’s funny how the fear of jail will keep you holding onto a coffee cup long after it’s empty.

Another interesting thing about the city is how safe it was. We traveled by Taxi, by MRT (think subway), and walked all over the city and never once did I feel uneasy. The crime rate is almost non-existent in Singapore. It wasn’t uncommon to see young children traveling by themselves on public transportation. When we would walk past a closed shop in the underground mall system, many of the stores wouldn’t even be locked up. They would simply have their lights off and chairs on the table. This may be due to Singapore’s strict penal code, Nonetheless, it was refreshing to explore without worry. 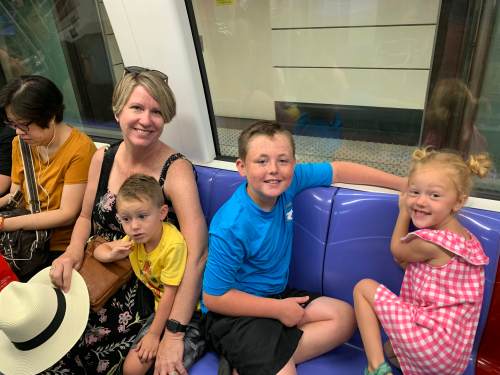 It’s cleanliness, safety, and green space come with a price tag and a big fat one for that. Singapore is THE most expensive city in the entire world (currently tied with Pairs + Hong Kong at the close of 2019). I’ve been to some expensive places before but this place left me with some serious sticker shock. I can’t even begin to imagine how the average Singaporean makes ends meet in this city. It’s 12$ Singaporean dollars for a gallon of milk and 17$ for a carton of strawberries. Even with the exchange rate that’s almost 13$ USD for a carton of strawberries. Strawberry shortcakes for dessert? I think not.

The wildlife in Singapore was a highlight of the trip. We saw signs warning of wild boars and it’s not uncommon to see wild otters move throughout the city. Just yesterday, my dad sent us a video of a duo of otters wrestling during his morning run. We spent one of our mornings hiking in the McRitchie Reservoir and were greeted by wild monkeys. We were mesmerized by them and could not get enough pictures. Not long into our hike, we saw a group of Asians gathered around taking pictures, we eagerly pushed our way to the front to see what amazing creature had been sighted. Y’all it was a Squirrel. A literal SQUIRREL. Meanwhile, wild monkeys were walking and climbing all around you, touching you, looking at you – and nobody was paying a bit of attention. It turns out monkeys are their squirrels – an everyday common occurrence, a pest at times, and nobody looks twice. 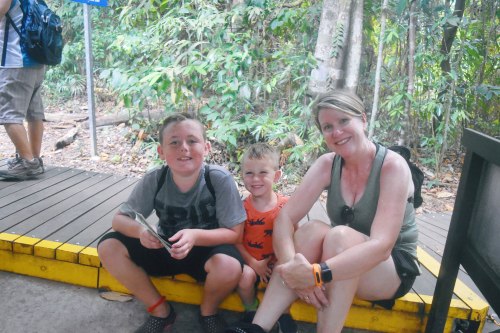 The Singapore zoo was impressive, to say the least. It’s huge and like the Bali zoo allows many free-range enclosures, meaning animals wander freely with no barriers between zoo guests for a truly interactive experience like no other. There are several feeding opportunities that I hadn’t seen before like the rhino feedings or the up close lion feedings. We had breakfast with the orangutans and then spent the day at the zoo.  We came back a different evening for the Night Safari. The Night Safari is a completely separate park (with separate admission) to see and learn about nocturnal animals. You start with a safari ride through the park with a tour guide leading you through the enclosures to see the different animals during their nighttime routines. There are several zoo trails that you can then walk (in the dark) and see the wide variety of nocturnal animals. My favorite trail was the river trail, as you walk along the river you can see different predatorial cats coming to hunt and fish in the river as the night settles in. 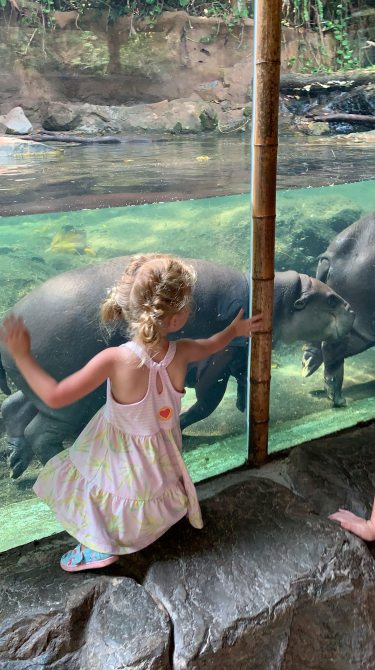 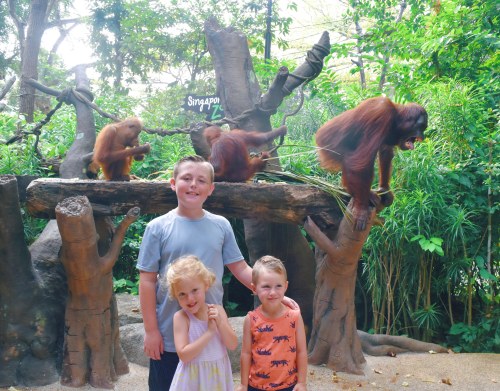 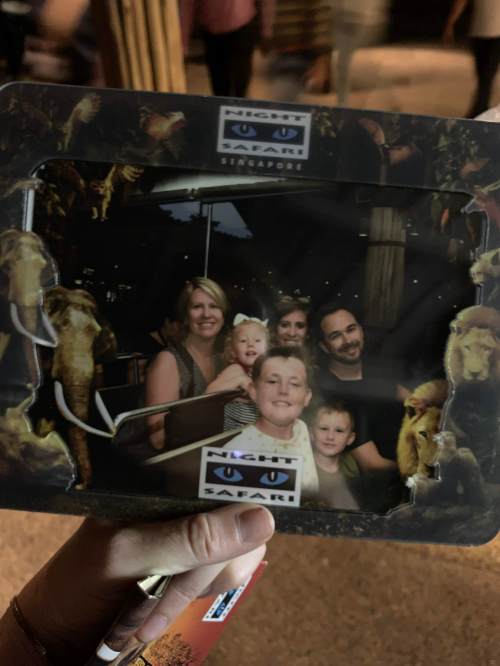 It didn’t take long to see that Singaporeans are pretty passionate about their food. Whose seen Crazy Rich Asians? You know the scene where Nick and Rachel land in Singapore and make their way to an outdoor street food market? Well, those Hawker Centers can be found all over the city. There you’ll find food from all over Asia. My parents’ apartment was a short walk away from Lau Pa Sat, a 100-year-old Hawker Center that comes alive at night. Promptly at 6 pm each evening, the main road right outside the center is shut down for street dining. Satay vendors roll in and it’s an experience like none other!  Satay = a meat kabob but with more flavor.  The mood is vibrant and the food relatively inexpensive (in comparison to other Singapore restaurant options). While I passed on the pig organ soup, I did opt for a chicken and rice dish that literally melted in my mouth. My picky little Chaser found a waffle vendor and some fresh-squeezed pear juice and was quite content to take in the evening sights and sounds. Throughout Singapore, we found new foods to sample and new treats to try. 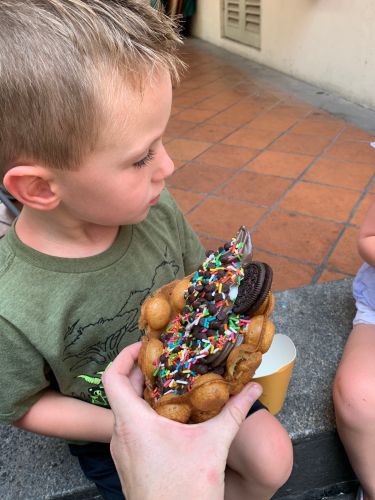 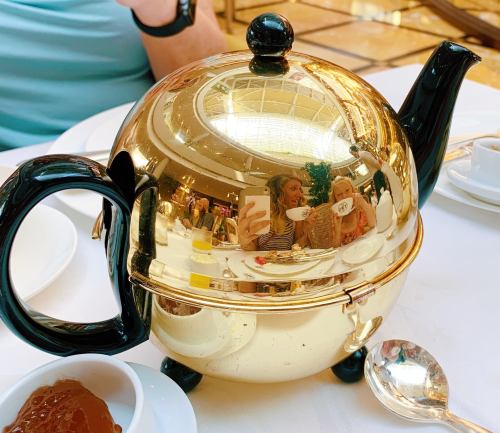 Probably my favorite thing was seeing all the different blends of cultures. Singapore is very westernized. It’s a hub for ex-pats and it wouldn’t take long for someone familiar with city living to acclimate. But that doesn’t mean it’s shy on culture. You just have to know where to look. Quick history lesson: When Thomas Raffles settled Singapore for the Brittish (1819), he separated the city into ‘cultural quarters’ for administration purposes. Even though Singapore became its own country in 1963 the culture centers remained. You can venture into Chinatown, Little India, and Arab street and be fully immersed in a beautiful culture from the stunning buildings to the food, to the artwork, and the street vendors. While I loved the souvenirs I collected, I was not so fond of the crispy fish skin chips I tried in Chinatown. I’ll try almost anything once and those will definitely be an “only once” experience. 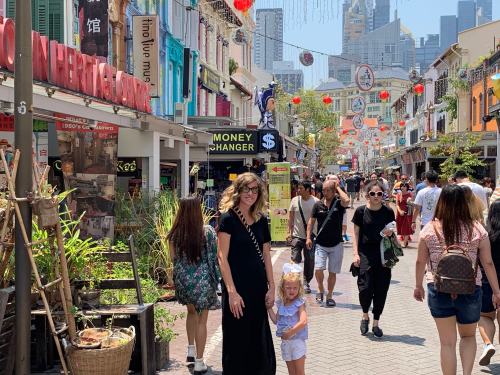 One of the most surprising parts of the trip was how much attention Addi James got. My little blonde-hair blue-eyed beauty was a hit with the locals. I often found people taking her photo and several even asked if they could pose for a picture with her. Look for her next time you are in Asia, you never know where those photos might end up!

We ended our trip with a gondola ride out to Sentosa, a tiny island off of Singapore. We wanted to say that we put our toes in the South China Sea and officially visited the southernmost continental part of Asia. Big bucket list checkmarks right there. Turns out there was a world sand carving competition the day we were visiting, with a special Star Wars exhibit. It was insane, I realized that I definitely need to beef up my sand carving skills the next time we go to the beach.

Asia was like coloring with a new crayon you didn’t know was in the box. All of your pictures suddenly have new life and you can’t wait to see what the next masterpiece will hold. Here’s what I learned: Asia is a huge and mysterious part of the world that has so many incredible places. It would be a travesty to limit Asia to only the places that everyone knows about. My parents will be there for at least three years and I’m already feeling the pressure to squeeze all the hidden treasures into three years. It doesn’t seem like it can be done, but challenge accepted!